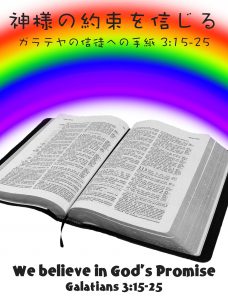 15 Brothers and sisters, let me take an example from everyday life. Just as no one can set aside or add to a human covenant that has been duly established, so it is in this case. 16 The promises were spoken to Abraham and to his seed. Scripture does not say “and to seeds,” meaning many people, but “and to your seed,” meaning one person, who is Christ. 17 What I mean is this: The law, introduced 430 years later, does not set aside the covenant previously established by God and thus do away with the promise. 18 For if the inheritance depends on the law, then it no longer depends on the promise; but God in his grace gave it to Abraham through a promise.

19 Why, then, was the law given at all? It was added because of transgressions until the Seed to whom the promise referred had come. The law was given through angels and entrusted to a mediator. 20 A mediator, however, implies more than one party; but God is one.

21 Is the law, therefore, opposed to the promises of God? Absolutely not! For if a law had been given that could impart life, then righteousness would certainly have come by the law. 22 But Scripture has locked up everything under the control of sin, so that what was promised, being given through faith in Jesus Christ, might be given to those who believe. 23 Before the coming of this faith, we were held in custody under the law, locked up until the faith that was to come would be revealed. 24 So the law was our guardian until Christ came that we might be justified by faith. 25 Now that this faith has come, we are no longer under a guardian.

24 So the law was our guardian until Christ came that we might be justified by faith. 25 Now that this faith has come, we are no longer under a guardian.

The promise of grace that God gave us is His one-way promise to us. But we humans just don’t believe it. We don’t believe it perhaps because we are overconfident of ourselves or because we underestimate God’s grace. We humans think of various policies to obtain a good life, but they are only to reveal that we are incapable to follow them because of our sin, and they can’t save us in the end. Let’s have faith in Jesus and believe in God’s promise of grace.

1) What is God’s promise to Abraham? How is it related to us?
2) What does it mean that the law is our guardian? What is the law to us?
What are good or bad of it?